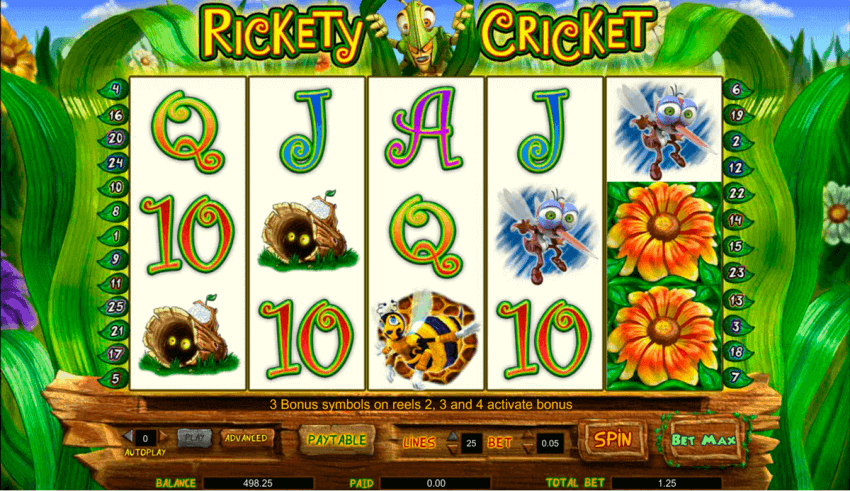 Mother Nature herself is the inspiration behind the Rickety Cricket video slot title. This slot game is a walk on the wild side with creepy crawly bugs hiding in every crevice. An animated burst of fun with a banjo-playing cricket at the heart of the action. Upon first glance Rickety Cricket slot looks like it is loosely based upon popular Disney movies such as A Bugs Life.

As the game progresses it transports you back in time and makes you feel like a child that believes in fairy tales again. This notion is echoed through the constant feeling of being in the Roald Dahl novel, James and the giant peach. A host of colourful characters within the game bring the slot title to life, players will get a sense of magic whenever spinning the reels.

Rickety Cricket slot is a 5-reel, 25-payline video slot powered by Cryptologic. The setting is an all-natural animated scene. Wavy blades of grass can be seen in the background with a cricket popping through on top of the screen. The wood like textures which display the players information add a nice complementary touch to the overall aesthetics of the scene, enforcing the all natural look of the game. The layout is simple with no distracting elements on screen, this allows players to focus on one thing, winning. The graphics have achieved a good balance between vibrant colour and functional fun.

The reels in Rickety Cricket slot are hopping with action and include; a flower which is the wild symbol, a bug zapper which is the scatter symbol, bonus logo, Queen bee, firefly, mosquito, a wooden log, a snail and playful traditional card symbols which include; Ace, King, Queen, Jack and ten.

The flower graphic in Rickety Cricket slot is a stacked wild symbol, meaning it can cover an entire reel. This is the highest paying symbol in the game and has the ability to substitute for any other symbol in the game except for the scatter symbol and bonus logo.

The bug zapper graphic is the scatter symbol and can be found on reel 1.  Furthermore players will be delighted to know that the Queen bee, firefly and mosquito symbols, which can be found on reels 2, 3, 4 and 5, pay exactly like the bug zapper or scatter symbol. The payouts for these symbols are structured as follows; one symbol 2X, two symbols 4X, three symbols 8X, four symbols 14X, five symbols 20X, six symbols 30X and seven symbols a whopping 40X.