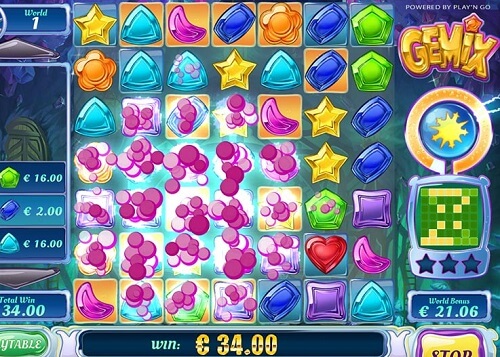 Gemix is a slots game that draws its inspiration from the gem-style games made popular by smartphone players. In a nutshell, these types of games allow people to form combinations of three or more same-coloured gem stones, which will then explode and disappear from the playing screen, allowing more gems to fall down from the top and take their positions.

The Gemix video slots game, designed and developed by Play ‘n Go, uses this basic premise and has added the gambling element into it. The game is played on a seven by seven grid, and here five or more gems will have to line up sideways in order to be counted as a win. As in the mobile games, every gem forming part of a winning combination will disappear, allowing more gems to fall from the top of the grid and fill up the empty positions, giving the players the chance to form even more winning combinations.

Look and Feel of the Game

The Gemix video slots game features gems as its main element, but these are enhanced through the background graphics and the accompanying sound track. The background of each world is different, so this will continually change as players progress.

The sound track also changes as players progress. In the main game, the music is light and easy-listening, but will go up in intensity with stronger bass and drum notes as wins are accumulated. The music also changes every time a player changes worlds.

The Gemix video slots game also adds the element of different levels to the gaming experience. Underneath the gems on the seven by seven grid, players will find blue squares. As winning combinations are formed and the gems disappear, the squares below the respective gems will turn from blue to orange.

As players move around the whole world, they up their chances of winning the progressive world bonus that forms part of the Gemix video slots game. This world bonus can be won once all the levels and worlds have been completed.

The Gemix video slots game also offers players special features. On the right side of the display, players will see a ‘Crystal Charge’ icon. Each gem that forms part of a win will move the metre up. Once twenty plus symbols form part of a spin, then players can choose one of four special behaviours.

The first is a nova blast. Here, a random explosion deletes many of the current symbols, allowing more wins to take place. Then there is the crystal warp, which takes on one symbol and turns all of them into different symbols. The light beam feature transforms symbols both vertically and horizontally. Finally, the chain lightning transforms symbols in a zig-zag pattern.

These features can be re-triggered by landing a super-charge with forty wins. Subsequently, all wins will be multiplied by three.