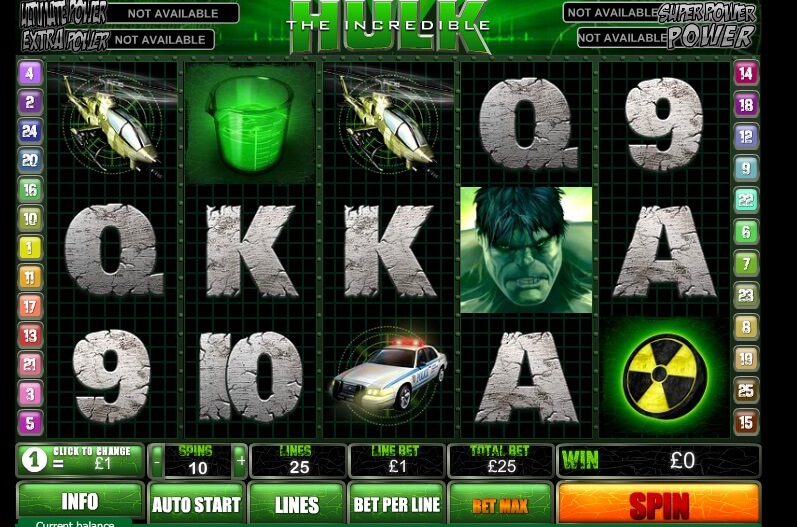 Recently portrayed on the silver screen by three big name actors, and before that by an iconic bodybuilder, Hulk has proven to be an incredibly popular character, given his limited vocabulary and dubious moral standpoint, which sets him very much aside from other superheroes. As the alter ego of Dr Bruce Banner, whose exposure to Gamma radiation didn’t kill him, but simply accessed the darker reaches of his personality, Hulk is driven entirely by anger, a mindless creature of destruction that is impervious to conventional weapons, or social niceties.

The slot opens with an intro taken from the film, in which Hulk battles The Abomination, a similarly muscle bound beast, with stirring music and special effects: the Hulk’s roar carries through to the animation of the reels themselves, where he appears as the Wild symbol.

The lower value symbols are those of playing cards, from the 9 to the Ace, after which the symbols of the police car and military helicopter are the next in value (and we all know how long those last around The Hulk). After this, we find the beaker of green goo and the radioactivity symbol, with the aforementioned Wild symbol able to substitute for all of these. If he appears in the centre of reel 3, Hulk tears the reel open as an expanding Wild, and leaves a trail of Wilds across other reels.

The Scatter symbol is the Incredible Hulk logo: finding three of these triggers the Free Spin stage, with multipliers equivalent to the number of Scatters. These free spins can re-trigger, and Hulk himself appears as a Wild character to potentially triple your winnings. The maximum win here is 12 000 coins, which, like Hulk, is not insignificant.

The game background is a simple green one, with the reels made to look like graph paper, and the sound effects simple, but effective, winning symbols each having a chord denoting their value.

As a Marvel game, the Incredible Hulk has a similar jackpot structure to Cryptologic’s other slots, with three levels of jackpot being randomly assigned at any point during a spin (although betting big will mean that “random” becomes more frequent), as well as being eligible for the Marvel Jackpot, which plays across several titles.

The Smash Bonus is triggered when its symbol appears in reels 1 and 5, and takes you to a second screen. Here, you control the Hulk as he goes on a rampage, and have to destroy police cars and helicopters: get three out of the 7 cars to get a cash prize, while helicopters land you a multiplier. Activate the random Rage feature, and Hulk smashes everything, netting you a tidy payout.

It’s hard not to like a giant green guy who destroys everything in his path, apparently, especially when he is winning you some great cash rewards in doing so. Best the great rewards on online bingo, The Incredible Hulk fits in very well with Cryptologic’s array of Marvel titles, and is sure to leave you, at least, a very happy player.